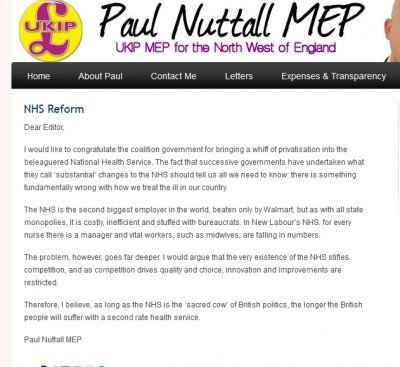 We’ve? had a few comments on onlineFOCUS in praise of UKIP … which is fine , as we enjoy having a bit of national politics on here occasionally. It also gives us the leeway to make the occasional comment back.
So… we hear a lot about the leader of UKIP, Mr Farage, but zero about his deputy, Paul Nuttall.? But? here’s an extract from Mr Nuttall’s own blog, where he calls into question the very existence of the NHS

I would like to congratulate the coalition government for bringing a whiff of privatisation into the beleaguered National Health Service. The fact that successive governments have undertaken what they call ?substantial? changes to the NHS should tell us all we need to know: there is something fundamentally wrong with how we treat the ill in our country.

The NHS is the second biggest employer in the world, beaten only by Walmart, but as with all state monopolies, it is costly, inefficient and stuffed with bureaucrats. In New Labour?s NHS, for every nurse there is a manager and vital workers, such as midwives, are falling in numbers.

The problem, however, goes far deeper. I would argue that the very existence of the NHS stifles competition, and as competition drives quality and choice, innovation and improvements are restricted.

Therefore, I believe, as long as the NHS is the ?sacred cow? of British politics, the longer the British people will suffer with a second rate health service.

Here at onlineFOCUS we support the NHS….. it’s a vital national and local service.