Last December the District Council refused a planning application for a golf course near the Chichester Hotel in Rawreth. Though it seemed more like an excuse to dump hundreds of thousand of tonnes of earth. Officers recommended approval, but one of us called it in to committee and we won the vote. You can still download the officers report here – it starts on page 8.

This is what we wrote at the time on onlinefocus:

Councillors seemed particularly concerned about the vast quantity of material proposed to be brought to the site, some expressing the view that the application was all about making money from waste, rather than creating a golf course. In the debate we got particular support from John Mason and Michael Hoy, but when it came a vote we got support from nearly everyone , including Toby Mountain, Conservatives and UKIP.

It’s worth quoting some of the comments we had after this on onlinefocus:

To say I am delighted to read this would be an understatement. I?m sure this won?t be the end of it, but at least the ground rules are now in place

A mighty well done to all concerned ? gives me some hope of a fair hearing for the forthcoming assault on the future of West Rayleigh & Hullbridge because the issues are the same.

I am delighted it was refused it is like a heavy weight lifted from my shoulders and I cannot thank those concerned who did such a lot of work and got it sorted out.

The applicants have now gone to appeal! This appeal will be decided by written representations. We will write soon about how people can make representations – the deadline is August 24th. 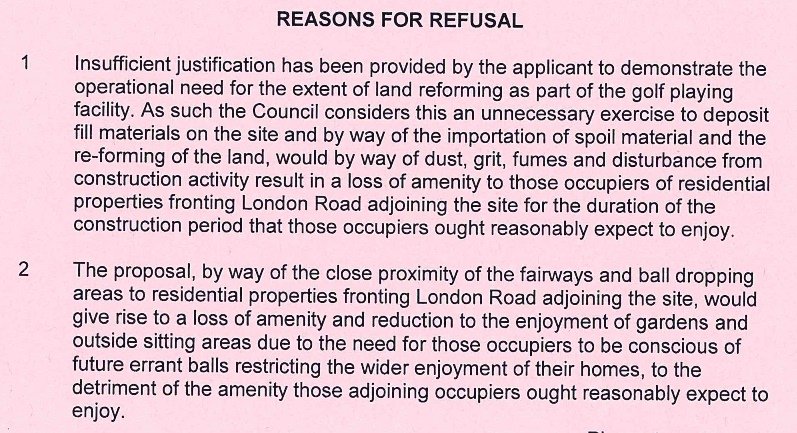