This map is from the South East Essex Action Group Alliance (SEEAGA) and shows proposed housing across the area…. double click on the map to enlarge it – it’s pretty big! 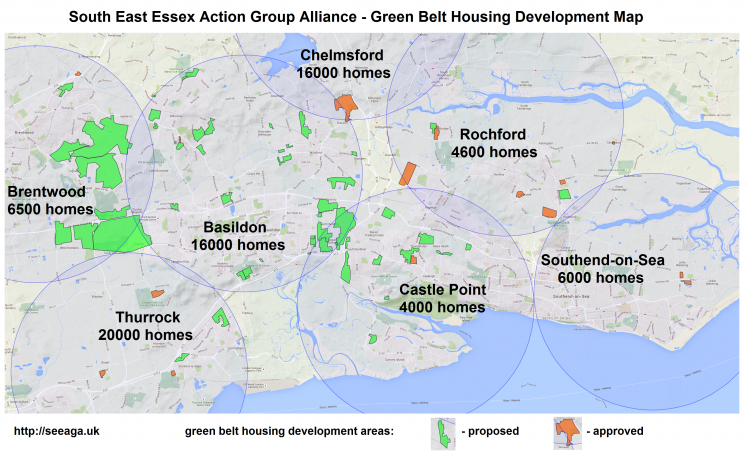 “The full extent of proposed new house building in our area is laid bare by research by the South East Essex Action Group Alliance.
If all of our local council?s plans materialise over 70,000 new homes will be built between Thurrock and Southend over the next 16 years. That?s equivalent to 5 towns the size of Billericay or Rayleigh or almost two new Basildons. Many of these new houses will be built on our Green Belt. The map at www.seeaga.uk gives the details.
In David Cameron?s locality the 13,000 homes of the new Garden City near Bicester will be built with all necessary infrastructure and at Northstowe in Cambridgeshire the first building to be erected in the new 10,000 home town is a school. Here in South East Essex the 70,000 new homes will be built field by field onto already overstretched infrastructure, with little hope of improvements for existing residents, let alone such a large scale influx of new inhabitants. Just imagine another 100,000 extra cars trying to use the A12, A13 and A127, or the impact of 150,000 new residents on the chances of a seat on the train to London or the waiting time for a hospital appointment.
The country needs new homes but drip feeding new builds in a haphazard manner in an already densely populated area with total disregard for the environment and living standards of current residents is not the way forward. South East Essex cannot take these numbers of new homes and it?s time our local and national politicians started to address the needs of their existing residents before bringing even more housing into this part of our county.”

It’s worth mentioning here that the Lib Dem policy at the general election was for garden cities with the right infrastructure:

There would also have been up to five major new settlements along a Garden Cities Railway between Oxford and Cambridge.