The minutes for the July 23rd meeting are now on the District Council website! The District Council has voted NOT to defend the appeal on the “North of London Road” site, despite the refusal in January being supported by most councillors, the leaders of all the political groups, our local MP and thousands of local residents. This is the decision:

You can download the complete minutes here. They explain a bit more, but not everything.

This is the vote on going into private and confidential:

This is the key sentence that really explains things:

This explains what happens with the appeal and the repeat application from Countryside : 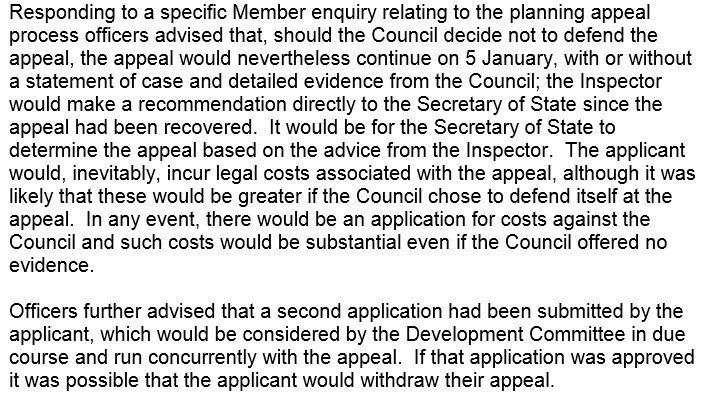 Ron and Chris have been campaigning to try to get a better Development Framework for about 7 years. We are naturally very disappointed at the outcome. And that’s an understatement. We see it as a kick in the teeth for thousands of concerned residents.

We watched individual Tory councillors vote again and again over the years to push the plan through, most of them silently following officer’s advice and the instructions of their party. A bit of public support back then from even one Tory district Councillor might have helped us to get stronger grounds for refusal or at least policies that would have given us better infrastructure. But we can’t recall any of them speaking out since the late Tony Humphries. Many Tories voted for refusal at the big meeting in January when an angry public were present, but they didn’t give us any support when we pointed out problems months and years ago. They didn’t listen either to Rawreth Parish Council , who were willing to engage with the District Council but were treated very poorly.