We’ve been reading the UKIP leaflet for Rayleigh South – and we are puzzled , and perhaps a little bit angry.

The first item is about development , and their candidate Keith Gibbs says the Core Strategy is ruining Rayleigh and Rochford, and adds that “I have campaigned against such development since 2007.”

Now the longest serving members of our team ,Ron Oatham and Chris Black , have been campaigning on this issue since around 2007. And if just one Conservative Councillor had broken ranks and supported us on this , not only would they remember it , that councillor’s name would have been all over onlinefocus with lots of praise ! It would have changed the whole situation. At that time Cllr Gibbs was still a Conservative Councillor – he hadn’t changed parties yet.

But no Tory Councillor did join with us on this. And if you want to check the history for yourself – type in “Gibbs” into our search box on onlinefocus, you can see that most of the times he is mentioned are in connection with him being Council Chairman in 2007. There’s nothing significant on the Core Strategy!

Now, the key meeting on the Core Strategy was in September 2009 when the the Local Development Framework Document was approved by the council by 23 votes to 4 – We did a full report that night and you can find it here. It begins like this:

The Local Development Framework Document was approved by the District Council, and will now go to a government inspector for a final OK. The voting figures were 23-4. The four against were Chris Black, Jackie Dillnutt, Ron Oatham and John Mason. There seemed to be no abstentions- Twelve counciillors were absent (10 Tories, plus June and Chris Lumley from the Lib Dems).

These are extracts from the official minutes of that meeting. It shows that quite a few of the current County Council Candidates were there – Keith Gibbs, Chris Black, Malcolm Maddocks, Terry Cutmore and John Mason. Only two of them are shown to have voted against: 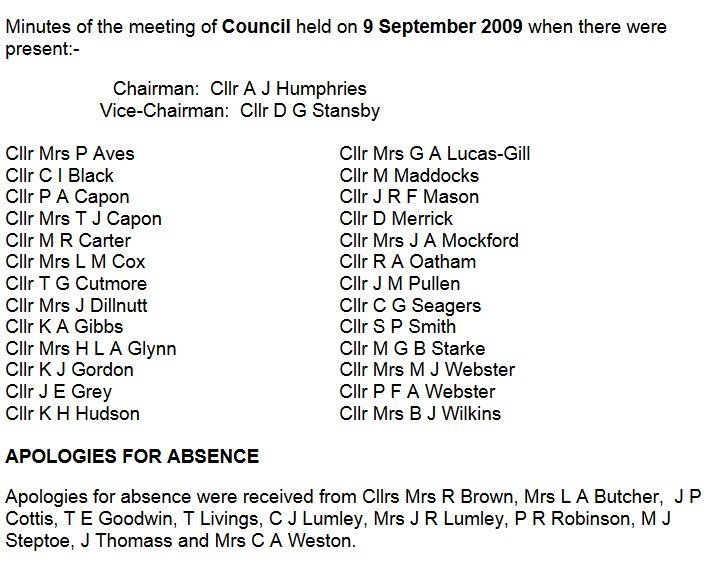