Nationally, this is a pretty good time for the Lib Dems . We are doing better than UKIP in opinion polls and the psephologists are predicting good results for us. To quote inews:

Lord Robert Hayward, who predicted both the surprise 2015 Tory election victory and the referendum result, forecast that Labour would lose “upwards of 125” of around 1,500 seats that it was defending. Ukip would suffer 80 to 90 losses, more than half of the seats it won four years ago. He predicted more than 100 Tory gains next month and around the same number for the Lib Dems….

Meanwhile in the various actual council by-elections across the UK we have been making a lot of gains…. It still requires LOTS of hard work for us to win seats, but the possibilities are there – both in areas that voted for Brexit, and areas that voted to remain. It’s not much of a talking point now on the doorstep. 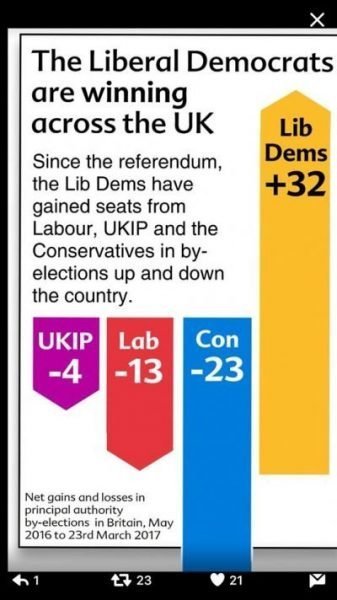