The Lib Dem group knows how important it is to house local people who have, unfortunately, become homeless for a variety of reasons. This post is not about the topic that is under discussion but about the democratic process of how a decision is reached.

Today RDC has published on their own Facebook Page confirmation that “Rochford District Council are making a recommendation to lease the Kings Head in Rochford, which is currently privately owned.”

Late last year (2017), there was an application made by developers to redevelop the Kings Head in Rochford to an HMO (House in multiple occupation)  – this tends to send shear panic through the minds of some residents as they envisage these types of properties being rented to ‘undesirables’ – however shortly after the decision was in the public realm, the portfolio holder for community, Cllr Mike Webb, made a public announcement of reassurance to residents on Facebook stating that “this property will have 100% nomination rights from RDC…..” when as far as other members of the council were aware, there wasn’t any such ‘deal’ that had been made at this time.

Today it would appear that Rochford District Council, will indeed try to make this very ‘deal’ with the developers and announced it on their own Facebook page. 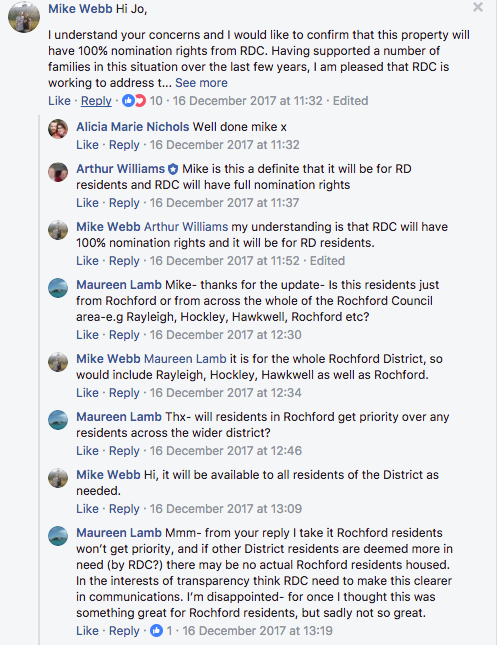 This does raise questions about how decisions are made by Rochford District Council.

So who exactly is making the decisions at Rochford District Council?

Are the decisions being made by officers who then instruct members who are whipped to vote a certain way?

Had Cllr Webb already been in talks with the developer prior to planning permission being granted?

If Cllr Webb had been in talks with the developer or was privy to the conversation between RDC and the developer who else knew about these talks?

How could Cllr Webb give these reassurances in a public forum when no decision (even to this date) had been reached by a majority of the 39 Councillors?

These questions remain unanswered and we can only assume that tomorrow nights Council meeting is just a case of ‘dotting the i’s and crossing the t’s’ – this really should be an eye-opener for residents on how decisions are being made, perhaps behind closed doors and a fine example of a ‘done deal!’

In conclusion, it will be interesting to see if Cllr Webb votes on this night as he has already shown a clear case of ‘pre-determination’ in his comments posted on Facebook.