What did we learn ?

1. The number of outstanding planning enforcement cases is currently a shockingly high FIVE HUNDRED AND SEVEN. That compares to 466 last October. Chris Black (who asked the question about this) was very critical. Cllr Keith Hudson, who is the cabinet member with responsibility for planning enforcement , said that the numbers won’t come down without more staff (there are currently only two officers dealing with this workload). He added that only 10 cases were “Category A”. Warning to anyone breaching planning regs: it seems that if you have done something without planning permission and one of those 507 logged cases is yours, it’s very likely to crop up on the search if you try to sell.

2. Multi-party politics is alive and well in Rochford District. The three leaders of opposition parties – Cllrs Black, Hoy and Mason were very active in the meeting, standing up and speaking , almost like a Rochford equivalent of the Three Tenors: 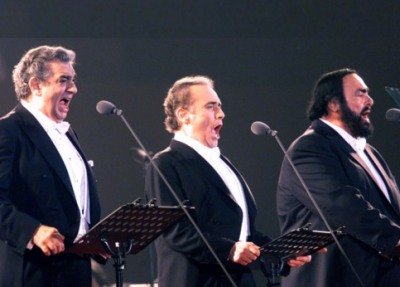 (though we spoke separately, not at the same time! And Councillor Hoy is a lot slimmer than that.)

Incidentally, the three small opposition parties sit next to each other in the chamber. Whereas the three political heavyweights on the Conservative side (Cllrs Cutmore, Hudson and Seagers) are well separated from each other, making it hard for them to confer during meetings.

It should also be mentioned that a couple of Labour Party activists were watching from the public gallery, plus a couple of Hockley campaigners…

And there was even a faint sign of life from the Tory backbenchers. A proposal to stop councillors ever deciding on homelessness appeals and always let officers decide things has been deferred after an apparent backbench revolt. The report is here, (69kb)

3. The situation with the Local Development Framework gets murkier and foggier. It’s difficult to explain it simply (Cllr Mason is the best at doing that). But basically:

The generally stated views of the parties seems to be:

4. The Conservatives treat public consultation with contempt. Perhaps the most interesting point of the evening was the motion from the Green Party that asked the council to recognise that over 90 percent of responses to the councils consultation last year on housing sites were against.

You might have expected a kind of ” Yes, but..” response from the Tories on this. Something like “Yes, we know that people are concerned, and we are sorry but we don’t think we can do any better’. Instead it was an almost sneering “So what?” response. They don’t think 2000 responses across the district is significant. They don’t even think that 867 objections from Hullbridge Residents alone is significant. Much too much arrogance there.

5. On the positive side, the council’s financial team did pretty well with our investments over the past year. We received ?64,200 more interest than what we would have expected as standard – the “7-day London Interbank Bid rate”. You can download the annual report on our investments here (209kb).